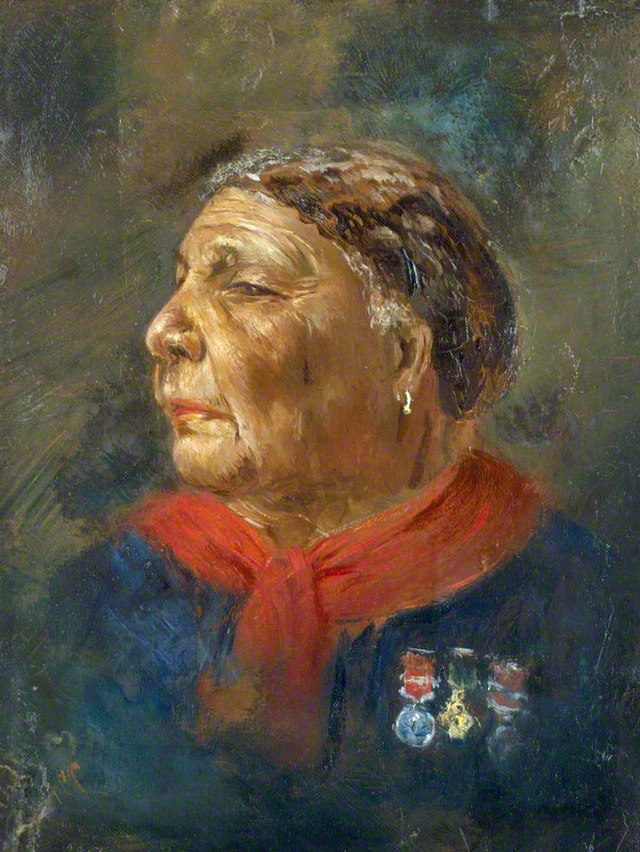 Mary Seacole was born in Kingston, Jamaica to a Scottish Officer and Jamaican mother, who was classified as a “free person” in a time when slavery still diseased the island. Mary’s mother ran Blundell Hall, a lodging house, where she also practiced healing with use of traditional Jamaican medicines. Her mother taught her these healing techniques, and by 1818, at 12 years-old, Mary was helping to run the lodging house. Many of these guests were injured and wounded soldiers, whom Mary helped tend. Her gifts as a nurse became apparent at this time.

In 1821, Mary traveled with family to England, where she learned about European medicine. She returned on her own in 1823, living in London for two years. Mary continued to travel, including to Cuba, Haiti, and Bahamas. She returned to Kingston, Jamaica in 1826.

On November 10th, 1836, Mary married Edwin Seacole. Edwin died eight years later. During his illness, Mary tended to him as his nurse. Mary’s mother died not long after Edwin. These two deaths, so close together, were a blow to Mary.

In 1851, Mary found a use for her medical training when a cholera outbreak struck Kingston. She found her skills useful again in 1852 when she moved to Panama to live with her half-brother, Edward. While she helped Edward run a hotel for those bound to the Gold Rush in California, she helped nurse soldiers and travelers during cholera outbreaks.

Once again on the move, Mary returned to Kingston in 1853. She tended patients there during a yellow fever outbreak and supervised nursing services at the British Army’s headquarters. She also rebuilt Blundell Hall, burnt down in a fire, and turned it into a hospital.

By 1853, Great Britain had declared war on the Russian Empire, thus starting the Crimean War. Mary traveled back to England and approached the British War Office to offer her expertise. However, she was turned away on account of her race. Her friend and late husband’s relative, Thomas Day, decided to provide her with funds to travel to Crimea and construct a hospital/hotel to care for officers. On her travels, Mary sought out Florence Nightingale in Turkey to offer her services, but again, she was turned away.

But this didn’t deter Mary. Ever persistent, Mary continued on to Crimea. She built her hotel near Sevastopol out of driftwood and packing crates. The “British Hotel” opened in March 1855 and was soon a success.

Florence Nightingale continued to turn her nose down at Mary’s assistance, claiming Mary ran a brothel out of the British Hotel. These claims were rooted in the fact that Mary sold alcohol from her hotel, because she had no funding from the British government. However, Mary was popular with the British officers for her willingness to go into the battlefield to care for the wounded. These soldiers called her “Mother Seacole.”

After the war ended in 1856, Mary returned to England nearly penniless. Intervention from Queen Victoria’s nephew, Prince Victor of Hohenlohe-Langenburg, provided her with a charitable fund donated to by citizens across Britain. Surprisingly, Florence Nightingale was a donor. Soldiers across England also donated and garnered support for her by writing to newspapers with praises for “Mother Seacole.” She also published her autobiography, The Wonderful Adventures of Mrs. Seacole in Many Lands, around this time.

In 1857, Mary expressed the desire to travel to India to tend to soldiers in the Indian Rebellion. However, Thomas Day convinced her to not go. She returned to Jamaica in 1860. She received patronage from the Prince of Wales and Duke of Edinburgh to construct a home in Kingston, but never one to stay in a place for long, she returned to England in 1870. She continued to practice nursing there, including rheumatism for the Princess of Wales, until her death at 76 years-old on May 14, 1881.

Mary Seacole was lost to history for over 100 years, until Caribbean nurses visited her gravesite in London. Mary was voted the Greatest Black Briton in 2004 and is honored with having numerous university and city hospitals named after her.