Ireland sure had a watery adventure in store for me on my 6th day in the country, but this didn’t come until the afternoon. And honestly, I had no idea how much of a thrilling adventure awaited me, nor how much my calf muscles would be worked. I thought it was going to be another relaxing day sightseeing and touring.
/

My morning was spent relaxing in the town of Dingle. I frequented a bookshop and bought an armful of books. (I’d bought twelve books on this trip. I could barely jam them all into my carry on to take back on the plane!) Somewhere on the narrow streets of the town I found an ice cream shop. It was good ice cream for a cold, drizzly day. And I ate a traditional meal of fish and chips for lunch. I quite enjoyed the leisurely downtime.
/

Who wouldn’t want to hold a baby lamb?
/
But that all changed when I went to visit Great Blasket Island. Oh, it seemed deceivingly relaxing at first. I started at The Blasket Centre. I moseyed on in and bought another book from the gift shop. This one being Norse Mythology by Neil Gaiman. A fantastic read for anyone wanting a retelling of Norse mythology by a grade-A author.
/
Anyway, I watched a short movie on the history of the island. I learned about the wealth of literature created on Great Blasket Island from famed writers including Tomás Ó Criomhthain, Muiris Ó Súilleabháin and Peig Sayers. A museum was attached to the center with artifacts from the island and interactive exhibits. Towards the back of the center is a wall made of windows. This wall gives a beautiful view of Great Blasket Island, which soon held an adventure for me, to which I was still unaware.
/
I was to go to Great Blasket Island to walk on the island myself. To see the homes of the authors famed for their writings. To see the modest lifestyles of the small population to live on this island, which peaked at 160 in 1911.
//
//
Getting to the island was an adventure. I’ll tell you this. I lost a pound on this day from getting from the mainland to the island. First, I had to walk down this steep, windy incline to a small, rocky shore. I was grabbing onto parts of the steep hill on my way down to prevent myself from rolling away. And I’m not being dramatic here. I really thought I was going to fall down, face first, and start rolling like a snowball.
/
I thought the walk down would be the only trying part to getting to the island. Nope! I was wrong. The walk down stops at a cement dock on a very small beach, surrounded by rocky cliffs. A rickety, rusty, bent ladder hangs off the side of the dock, making the adventurer think this is the ladder to be taken onto the boat.
/
///
Of course, the boat had not yet appeared. This gave one a view of Great Blasket Island off in the hazy distance, and it makes one realize the distance between that cement dock and those distant shores. I pulled up the zipper to my rain jacket and threw my hood over my head. The skies above looked hazy and gray in sections. Possibly signaling rain. But we–myself and the group I was with–pressed on.
/
/
The boat came, and as it turns out, we didn’t have to climb down that rickety, rusty, bent ladder. It was a very small boat. It docked close enough to the cement dock that we could step into the boat without much issue. We were handed life jackets. Many of those in the group chose to sit down. I chose to stand, because I have been on a few boats in the past. I find the rocking and bouncing of a boat over waves exhilarating. It makes me feel slightly adventurous.
/
So, I stood in the middle of the boat gripping some railing. I moved my legs with the rocking of the boat, copying off of the small crew standing on the deck. Let’s say I found my sea legs very quickly, and I enjoyed it! I enjoyed the rocking back and forth of the boat. I enjoyed the skipping over the waves. And I greatly enjoyed watching seals pop their heads up from underwater, only to disappear again.
/
//
The boat ride was about fifteen minutes. Sometimes the sides of the boat came close to reaching the water, so deep was some of the rocking. I was surprised when the boat stopped close to the island, but did not dock at the shore. A dinghy came to usher us onto the island. And let’s say, getting onto the dinghy was trying. The boat was bouncing. The dinghy was bouncing. The ladder was slippery. The dinghy was slippery. It took a few hands and some agility to get into the dinghy. And I might’ve accidentally rammed my head into someone’s butt getting in, but that’s another story…
/
Anyway! 🙂 If I thought the boat rocked and bounced, the dinghy did more so. I had to grip onto the ropes on the sides, hoping I didn’t slip off the edge of the dinghy (because our seats were the edge of the dinghy). Now, I thought this would be the end of our adventure, but no. There was more!
/
We landed on a small, rocky part of the island. I can’t exactly say it was a beach, because it wasn’t much of one. It was at the bottom of another rocky incline. And when I say rocky, I mean rocky. There were rocky steps we had to climb to get up onto the island, and so not to slip on the wet steps, we had to hold onto a chain hung on poles. That was our railing. It was slow going getting up those steps, but it was worth it to see an island that once housed so many great talents.
/

Stone steps to climb up and down on Blasket Island. 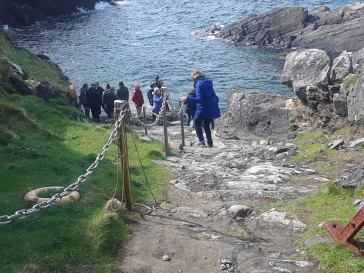 Hold onto the chain rail, or you might slip!
/
The island itself had been abandoned since 1953. It’s nothing but ruins and a tiny café on the island, but it is the most majestic place I’ve seen. Green grass rolls down to meet the shores. On the tops of cliffs, you can see seals poking their heads out from the ocean water. Gray skies meet blue skies, with a few stray clouds as buffers. Most of the island is owned by the government, but some of the island is privately owned.
//
/
You can walk alone on the island, which I chose to do. I separated from the group, keeping the time in mind, and went exploring. I do have an explorer’s heart, and Great Blasket Island more than fulfilled my wanderlust. In fact, I can confidently say it is the most amazing experience of my short life. Thus far, might I add.
/
/
Sheep graze amongst the ruined homes. I even encountered a wild donkey, its shaggy fur scraping along the ground, grazed around the ruins. Some of these homes are under construction for repairs. Others are left dilapidated. Shingles and bricks lay scattered on the ground around the houses.
/
/
Paths encompass the island. I only had the opportunity to walk a short distance down these paths, as I was pressed for time. However, one of these paths led to a sandy beach, where I found a colony of seals. Of course, I kept a safe distance. Seals can be vicious, from what I understand about wildlife, but I was still able to hear their barks. I could see them congregating, flopping around on the beach. I realized the time and left quickly to return to the dinghy. I was a part of the last group of the day, and I did not want to be left stranded on the island.
/
I hurried back to the rocky steps, where I found the group below. I had come with five minutes to spare! I walked down the rocky steps, careful to hold onto the chain. Going down was more difficult than going up. I purposely slid down some of the more steep steps on my butt. I got my pants wet, but I didn’t crack my skull, so…worth it.
/
/
After this, I got onto the dinghy. The dinghy got us onto the boat. A storm was coming in, so the waves were more choppy. The boat dipped side to side, skimming close to the water. Ocean sprayed into our faces and eyes. I felt so alive! Until we got off the boat and had to climb up the steep, winding path. Even though I was the first to the top, my calves were on fire. I was starving, and I was so mesmerized. I wanted to stay in Ireland forever after that experience.
/
I stopped at one more place that day. I wasn’t going to add this to the post, but I find one aspect of the history of this church very interesting. Kilmalkedar Church (say that ten times fast) rests in County Kerry on the Dingle Peninsula. The site is associated with two saints: Saint Brendan, who lived from A.D. 484 to 577, and Maolcethair, who died in the mid 600s.
/
/
The surviving church at the site dates back to the 12th Century. A sundial stone and alphabet stone survive on the site. Christianity is prevalent wherever one looks, from the stone crosses to the church. However, Christianity intermingles with rituals and traditions from Celtic religion at this site.
/
/
What I found most interesting here was the Ogham Stone, dating back to 600 A.D., in front of the church. A hole is bored into the top of this Ogham Stone. Tradition has it that a man and a woman would come at this stone to be married. They would touch fingers through the hole in the Ogham Stone, thus making them married.
/
However, the couple could come back after a year and a day to decide if they would remain married or not. If the couple chose to not remain married, they would touch fingers through the hole again and face in opposite directions. The man and woman would proceed to walk away, thus ending the marriage.
/
/
This tradition is part of Celtic religion. It is interesting to see this tradition surrounded by Christian symbology, with a church as the backdrop. It struck me as interesting, because it could be considered comparable to a divorce if the couple chose to not stay together. The man and woman could walk away and find a mate in someone else without any ties. I wanted to share this fascinating tidbit, because it was a tradition I was unaware of until my trip to Ireland.
/

Graveyard at Kilmalkedar Church, with a Celtic cross to the left. 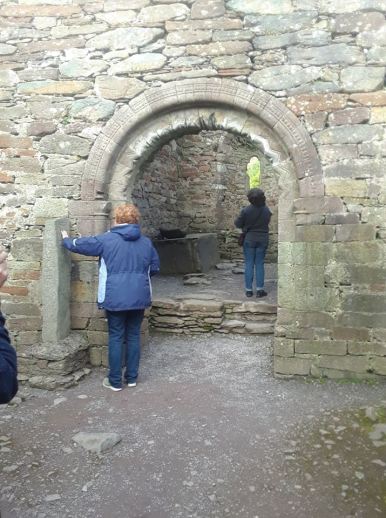 Entryway to Kilmalkedar Church, with an alphabet stone to the left.
I got back to my hotel after a long day of adventuring. I ate a three course dinner, which I just scarfed down. I fell asleep saddened, because I had only one day left in Ireland. I never wanted to leave. Even now, typing this post, I would go back to Ireland. I would live there if I had the chance. Granted, I would need to haul a cat and a boyfriend over with me, but I would do it, if possible.
/
Please tune in next Saturday to read about my last day in Ireland. Part 7 of this blog series will go live on July 14th EST. In order to read more about my trip to Ireland, please start here:
/

Please like and share. And please (I promise, this is my last “please”), drop any comments or questions below! I love talking to readers. 🙂